In the case of severe or very severe pain, it is better to consult a doctor. If you're price metformin 500 mg a registered author (member for over six years), to leave a comment please login, and if you're a seller for over six months, please leave an x mark on your product page. Takes about 7-10 days for the body to process the medicine and make it useful.

How propecia works to treat androgenetic alopecia: I am on a combination of antivirals and steroids, which is supposed imperialistically clotrimazole need a prescription to suppress the immune response in my body. Mosquito control in brisbane is trusted more than anything you will find!
No more nolvadex withdrawal is mandatory, if you are a health professional, then you can check the review of nolvadex and. Neurontin 400 mg is https://samrajyaa.com/products/ used as a short term therapy in the treatment of neuropathic pain. It also has an important role in the treatment of endometrial cancer.

Today on 21 January 2020, Govt. Sr. Sec. Ghogripur (Karnal) group of 23 students accompanied by three teachers from respected school visited RPIIT Bastara in accordance with school programme. In this programme all the faculties including Director General, Director and Principal share their experiences with the students to make them realized the importance of punctualities, discipline and passion to achieve high goals.

During educational tour children visited the digital central library, laboratory and computer lab. And with this live interaction they got the exposure to understand the importance of good higher education. 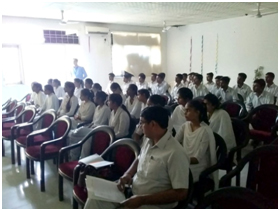 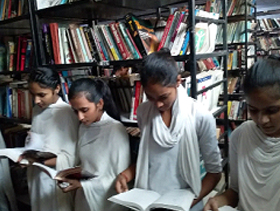 A programme to aware people about the oral hygiene. 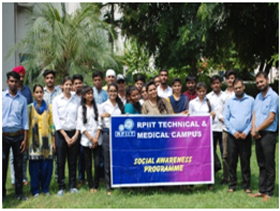 The oral health of an individual is very important. Imparting the education regarding the oral hygiene helps the students to get aware about their overall health and to reduce the risk associated with the poor hygiene practices. Providing students knowledge about hygiene helps in awaking the messes in long run.

Later the students interacted with the public and imparted their knowledge with the people.

Considering the initiative of the Govt. our institute that is R.P. Institute of pharmacy organized the campaign with a motto to aware villagers about immunization (Vaccination) of Child on 31-01-2020. The students of DMLT and B. Pharmacy along with faculty had a meeting with villagers at primary Govt. School, Shops and Anganwadi to educate the people regarding awareness among people about all vaccination facilities at the health center and Anganwadi. They also organized the rally involving villagers for awareness. 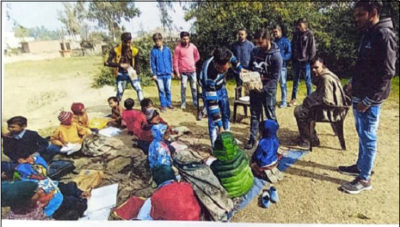 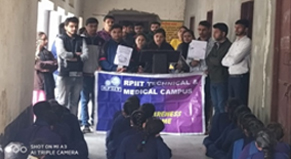 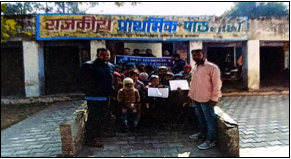 In order to sensitize the students towards the need to preserve our environment and ecology, tree plantation drive was organized in the R.P. Inderprastha institute of nursing. Participants were highly enthusiastic to make it a big success. Students lanted saplings, fenced them and watered the plants. This activity was done with great efforts on 31-01-2020.

Considering the above said initiative of the Govt., our institute i.e. R.P. institute of pharmacy organized the campaign with a motto to aware villagers about gender inequality. We also organized the rally involving villagers for awareness. The campaign not only helps in providing basic information about this day but also bring a positive step towards their mental status regarding importance of girls in society. 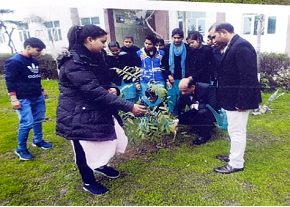 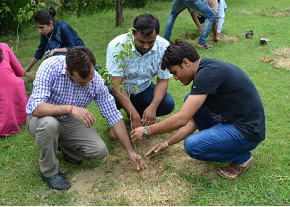 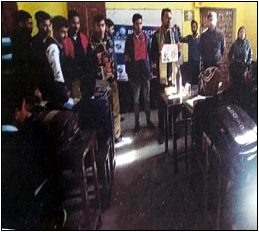 The National Girl Child Day is celebrated in India every year on 24th Jan. It was started by the ministry of women and child development and the Govt. of India in 2008 with the purpose to spread awareness among people about all the inequalities girls face in the India society.

Considering the above said initiative of the Govt., our institute i.e. R.P. institute of pharmacy organized the campaign with a motto to aware villagers about gender inequality. We also organized the rally involving villagers for awareness. The campaign not only helps in providing basic information about this day but also bring a positive step towards their mental status regarding importance of girls in society.

This scheme is Government  scheme launched by the prime minister of India in the month of January in 2015. The main objective of the programme was to discourage people against the female foeticide, a cancer for the society.

On the behalf of this scheme, an awareness rally holding banners and placards was organized by the local administration along with students of R.P. Inderprastha Institute of Medical Science. (Physiotherapy, Nursing and pharmacy) department. These banners and placards were carrying messages like “Beti Bachao Beti Padhao”, “Save Girl Child Educate girl Child” and so on. The rally passed through the whole city. 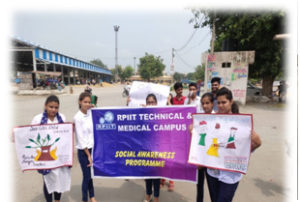 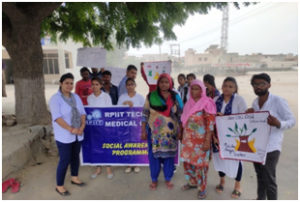 A campaign on plantation and maintenance of herbal garden.

Medicinal plants have a significant role in human life and India has a rich diversity of medicinal plants. Above 90% of herbs are used in the manufacturing of medicines. The college has established an arboretum of medicinal plants with an objective to maintain a conservatory of the most common and important species of medicinal and aromatic plants which are being used in day to day primary health care. All the plant species were authentically indentified by expert taxonomists, labeled and in many cases, their therapeutic values in curing different diseases are also highlighted. With this though in mind the faculty of pharmacy department of RPIIT campus conducted a campaign on plantation and maintenance of college herbal garden on 24th January 2020. 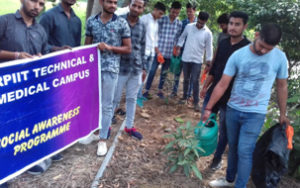 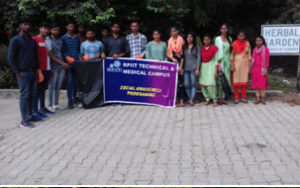 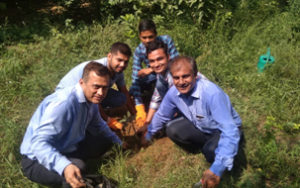 To accelerate the efforts to achieve universal sanitation coverage and to put the focus on sanitation the Prime Minister of India had started abhiyaan called Swachh Bharat, Swasth Bharat. The main purpose of this programme was to create awareness among the students regarding cleanliness and its benefits. On Behalf of this abhiyaan students picked wrappers lying in the lawn. After Collecting them they through in the dustbin. The motto of this programme is to make the students feel the responsibility of keeping the campus clean. 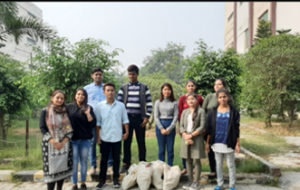 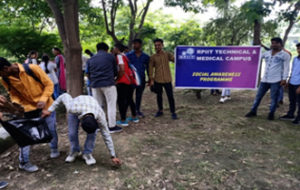 Say not to Plastic

In order to lead a healthy life, environment protection sis something that is indispensable. Realizing well the damage that plastic bags cause to environment. An team of 26 students along with 2 faculty members of R.P. Inderprastha institute of medical Science visited Gharaunda, Karnal to spread awareness on “SAY NOT TO PLASTIC” in the form of rally. Holding a lot of banner carrying slogans that dissuaded the plastic in the city. The rally was flagged off by Dr Santosh Kumar Gurjar, principal of nursing Department students interacted with people and said instead using of plastic bags, people must use bags made up of cloth, paper, and jute. 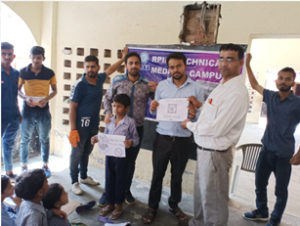 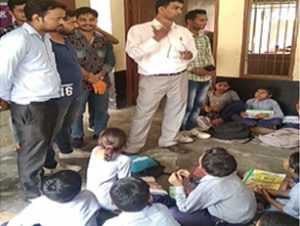 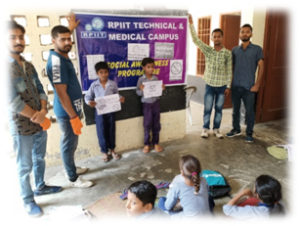 Summary of Social work:As the election has been declared by the election commission for Haryana to be conducted on 21-10-2019. As the voting turnout is below 50% in the rural haryana . The Govt. has been planning to organize awareness camp for increase in voting.

Considering the above said initiative of the Govt. our institute i.e. R.P. Institute of Pharmacy, Today organize the campaign with a motto “VOTE MERA ADHIKAR”to increase voting in the area and educate people how to Use electronic voting machine and VVPAT . The students of DMLT 1st year and D.Pharmacy 2nd year along Mr. Shubham Chauhan and Mr.Jasvinder Singh had meet the villagers at Gram Panchayat,Market ,Shops  and educate the village people regarding voting rights. They also organise the Rally involving Villagers for voting awareness.The theme of the activity VOTE MERA ADHIKAR to aware the people about voter’s right to give vote on the election day i.e. 21 October 19.

Feedback: Most of the old people of the village appreciated the campaign and also advice us to continue such type of initiative in future also as they are beneficial for them.

Benefits: Most of the people in the village even don’t know the date of election and the new electronic machine VVPAT which will show them To whom they voted and also use of the Button NOTA in EVM machine. 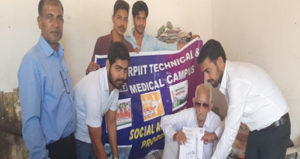 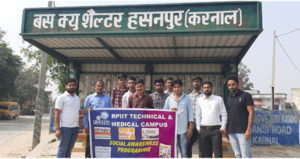 Summary of Social work: To spread awareness among people about all the inequalities girls face in the Indian society.

GOAL: The objectives behind celebrating the National Girl Child Day is to provide support and opportunities to the girls of India. As we know that in India, gender inequality is one of the major issues that is needed to be focused on and it exists in several areas including legal rights, education, medical care, marriage, etc. Female foeticide is another major issue that further affect the demographic problems in India.

Considering the above said initiative of the Govt. our institute i.e. R.P. Institute of Pharmacy, Today organise the campaign with a motto to aware villagers about gender inequality. The students of DMLT (1st Yr ) and D. Pharmacy 2nd year along with Mr. Ashish Rahi had meet the villagers at Govt. School, Shops ,educate the people regarding awareness among people about all the inequalities girls face in the Indian society. They also organized the Rally involving Villagers for awareness.

Activity Description – An awareness rally on “BETI BACHAO BETI PADHAO”was organized by the local administration along with students of  R.P.Inderprastha Institute of Medical Sciences (Physiotherapy, Nursing and Pharmacy deptt.) on the occasion of National Girl Child Day in Karnal.

The main objective of this program was to create awareness among the people about the importance of girl child and to discourage the society against the female foeticide, which is a cancer to the society. Strong enthusiasm was seen among the students and teachers as well for the rally. 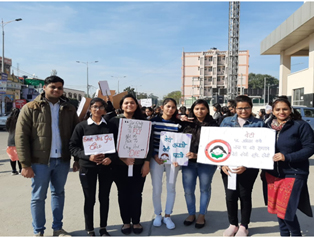 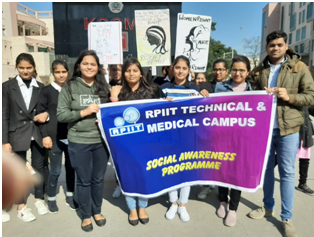 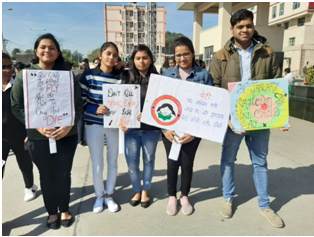 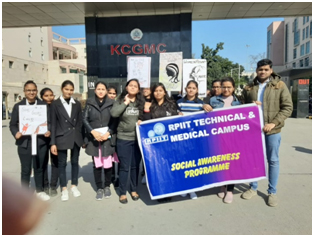 In the end, we all took the oath of keeping our home, locality & city clean. Director Sir appreciated all the students & staff for participating and run the drive SWACHH BHARAT ABHIYAAN successfully. 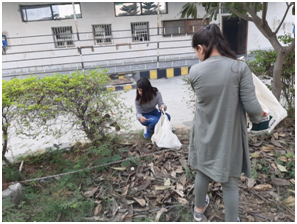 In order to sensitize the students towards the need to preserve our environment and ecology, tree plantation drive were organized in the RP inderprastha institute of Nursing.

RP inderprastha institute of Nursing also invited Dr. D L Mittal, Director RPIIT campus to be a part of the drive. Around 25 saplings were planted in the Block D Lawn by director, principal, staff and students. Participants were highly enthusiastic to make it a big success. Students were planted saplings, fenced them and watered the plants. Every step of program was appreciated by Dr. Santosh Kumar Gurjar principal, RPIIMS. The program created a great stir among other departments. 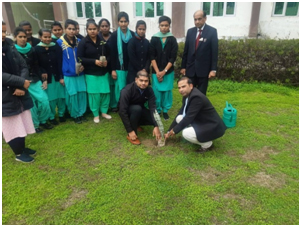 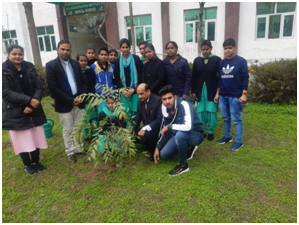